So I have been thinking for a while on getting back to blog and I figured that I could try to set something up on my home server.

My resources are really limited so, even though I actually hate the trend, I decided to run my blog on Ghost.

I also wanted to have some sort of isolation on the things that run on my server thus I had two realistic options: docker or running traditional Virtual Machines. Remember I mentioned that my resources were limited? Thus, docker was the chosen option.

I didn’t want to serve the blog straight from docker, so I opted for running a web server in front (although this one is not running on docker 😉 ).

This is not a very complex nginx configuration, essentially it’s just a proxy. The most relevant thing might be the use of Let’s Encrypt ( maybe I write something about it some other time).

Now let’s have a look at how to create the container to run ghost.
Why not use the official image? Well, I actually can’t as my home server is ARM based. I did a quick research on-line and found easypi/ghost-arm and kennethlimcp/armhf-ghost. Neither of them suited me properly as the first one doesn’t have much information regarding how it’s built and the second one, even though looks very nice, builds the images based on Debian and their alpine version seems a little bit outdated. Besides, I got to practice a little bit on how to emulate ARM on my workstation :-).

I followed this guide to set up a VM with ARM emulation so I could quickly build my docker images ( ‘quickly’ is really not the right word, the VM is slow ).

I heavily based my work on the official image with slight changes. You can find the end result here.

Right now I am running the blog on a development version of the docker image but I will try to upload the final one to my recently created docker hub repository.

One the image was built, I only needed to run the container:
docker run -d --restart always -v $blog:/var/lib/ghost -e NODE_ENV=production -p 2368:2368 marcdeop/ghost-arm:0-alpine 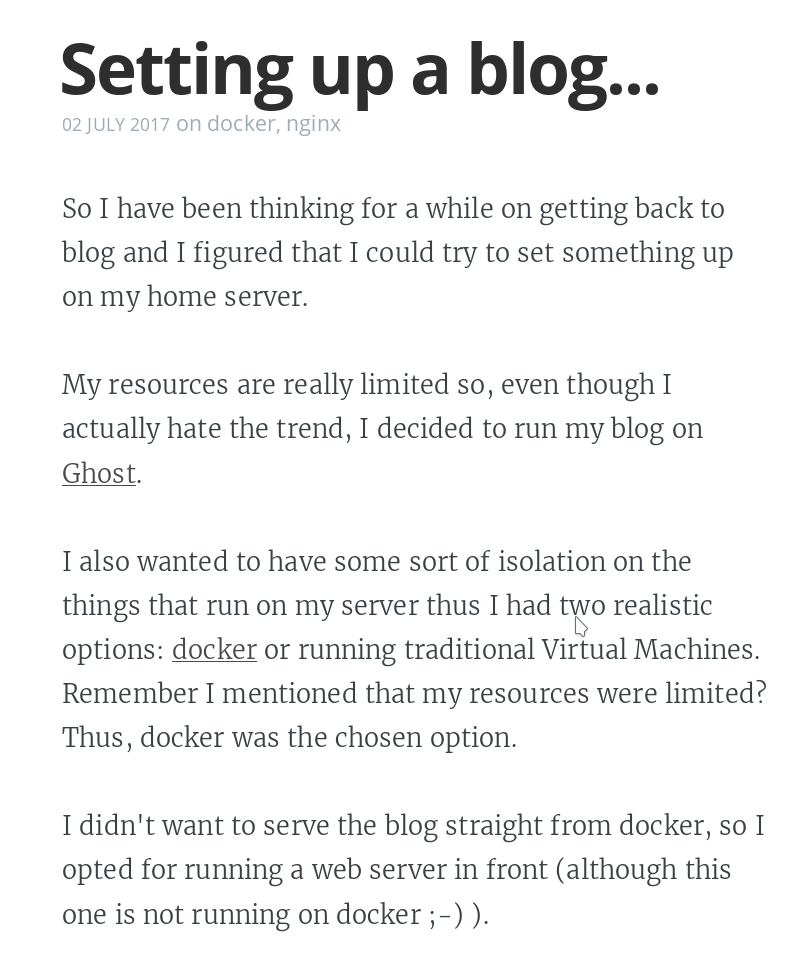 I haven’t yet found a theme that I really like, this needs further investigation but so far… I am quite happy with the status.